By recepeken on October 24, 2012 Domestic / Industrial  ·  Comments Off on Rethink Robotics Revolutionizes Manufacturing with Humanoid Robot 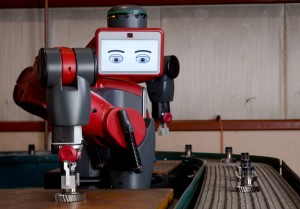 BOSTON, Mass.,– September 18, 2012 – Ushering in a new era in robotics, Rethink Robotics today unveiled  the world’s first humanoid robots capable of applying common sense behavior to manufacturing environments.  Affordably priced, versatile and safe enough to work shoulder-to-shoulder with people, Rethink’s new line of Baxter robots redefine how small, mid-size and large domestic manufacturers use automation to compete with manufacturers in low-cost regions of the world.
To tweet about this news, simply click here: http://clicktotweet.me/5f01dcm6
Based on the vision of Rodney Brooks, co-founder of iRobot and former director of the MIT Computer Science and Artificial Intelligence Lab, Baxter breaks down the cost and safety barriers that have limited automation in American manufacturing up until now.

“Roboticists have been successful in designing robots capable of super-human speed and precision.  What’s proven more difficult is inventing robots that can act as we do – in other words, that are able to inherently understand and adapt to their environments,” said Rodney Brooks, founder and CTO of Rethink Robotics.  “We believed that if we could cross that chasm with the manufacturing environment specifically in mind, we could offer new hope to the millions of American manufacturers who are looking for innovative ways to compete in our global economy.”
Rethink’s Baxter robots are groundbreaking in six different ways.  No other product on the market can:
·         Apply common sense to its environment – Baxter understands and can adapt to the way the world works.  For example, if Baxter drops an object, it knows to get another before trying to finish the task.
·         Safely work alongside humans – Baxter comes complete with sensors and related software to help it see and understand its environment.  These design elements, coupled with its ability to apply common sense, allow Baxter to work next to people – eliminating the need for cages to keep robots and people separate.  This is a new concept in manufacturing.
·         Be trained with no expertise required – Unlike traditional robots that require sophisticated software programming, Baxter can be trained just as you would teach a person.  Typical factory workers can interact with the robot directly to train it to do a task in less than 30 minutes.
·         Offer broad task flexibility – Because of its versatility and the short amount of time it takes to retrain, Baxter can be easily moved by production personnel to different and varying tasks over the course of a day, week and month.  This flexibility can make the difference for contract manufacturers that need to quickly make adjustments to meet demand.
·         Bring automation to manufacturers of all sizes – Baxter was specifically designed to be affordable for midsize and small manufacturers, companies that have never been able to afford robots before.  The list price for the Baxter robot is $22,000 and with zero integration required, the solution is a fraction of the cost of a traditional industrial robot.
·         Go from delivery to the factory floor in one hour – Baxter is a complete and self-contained system.  Unlike traditional robots that require manufacturers to make additional capital investments and develop custom software, Baxter comes ready to be used on the factory floor in less than one hour.
Manufacturers like Nypro have already seen the potential of Rethink’s Baxter.  “Our customers come to us because they trust us to bring the highest quality and the best value,” said Michael McGee, Director of Technology, Nypro Inc.  “Our business has been built on that trust one customer at a time for over half a century, around the world.  Rethink and their advanced robotics platform Baxter, helps us to sustain this offering and enables us to continue to bring solutions to today’s complex manufacturing challenges.”
Baxter is a complete system with application software that will be enhanced through regular software updates.  Rethink will also make a software development kit (SDK) available in early 2013, opening up Baxter-centered innovation to programmers, robot enthusiasts, inventors and anyone else with a passion for cutting edge technology.
“Our guiding vision was to create a robot that would break the mold in two distinct ways.  First, the robot had to inherently function in a totally new way,” said Scott Eckert, CEO of Rethink Robotics.  “We also set out to create a hardware and software platform that could be extended in limitless directions through new software applications.  As we release new software that expands Baxter’s abilities, our customers can take advantage by simply updating the software on their robot.  And with the SDK, the opportunity to think of new and novel ways to use Baxter is open to the world at large with our customers as the primary beneficiaries.”
From innovation to production, Baxter is uniquely a product of the U.S.  “It was important to us that we remain true to the vision of the company and Baxter is proof positive that you can manufacture a superior product cost effectively with American manufacturing,” Eckert concluded.
Already on pre-order, the first product shipments of Baxter will begin in October 2012.  More information about Baxter, including photos and videos, can be found here: www.rethinkrobotics.com.
About Rethink Robotics
Rethink Robotics, Inc. developed the world’s first robot with common sense to increase productivity and efficiency in manufacturing environments.  Introducing robotics into places that have never been automated before, Rethink’s Baxter robot is making manufacturers more efficient, their workers more productive and keeping jobs from migrating to low-cost regions.  Based in the Innovation District of Boston, Massachusetts, the company is funded by Charles River Ventures, Highland Capital Partners, Sigma Partners, Draper Fisher Jurvetson and Bezos Expeditions, the personal investment company of Jeff Bezos.
For more information about Rethink Robotics, please visit www.rethinkrobotics.com or follow on Twitter @rethinkrobotics