A new robot baby seal has been developed by a Japanese company called Therapeutic Robots, and has been shown to public at the recent Las Vegas Tech exposition.The machine’s whole body is covered with sensors that will enable it to understand all touching by its owner. Its AI also enables it to remember the previous […] 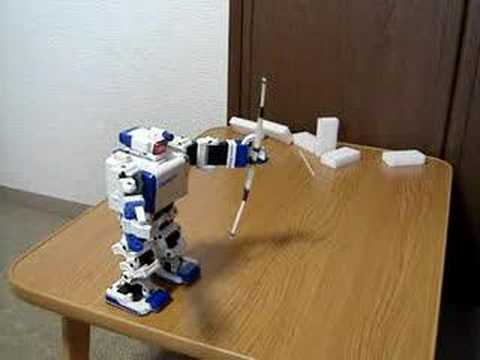 The humanoid robot toy I-Sobot has just cut its price to $100…Last year’s price was $300. For this price, the robot has an amazing 17 servo motors, voice command recognition, 200+ word vocabulary, gyro sensor, preprogrammed moves such as karate moves and dancing with sound effects. In the video below, you can see how thr […]

World’s smallest humanoid toy robot has been unveiled in Japan by Tomy Co. The robot is able to operate for 5 minutes on a 30 minute charge and can find its way through mazes, and there is also a remote controlling option. The price is $35. For more, please visit the link below. Reference: crunchgear.com/2008/10/15/robo-q-tomy-unveils-thumb-sized-walking-robot/

Robot toy cycler has been unveiled by Japan’s Murata Manufacturing. The robot is able to balance itself on one wheel and at the same time can detect obstacles with its sensor in order to move around them. The robot will be improved to move in every direction freely. For original story, please click below. Reference: […]

The recently announced female robot by WowWee is now on sale. Femisapien, sells currently on online store for about $100. The robot toy includes many tricks, such as singing, dancing, chatting and can be programmed into movements up to 80 steps long. Please click here for more.

WowWee is releasing a new toy robot called Wrex. It has four modes: Free Roam, Guard, Demonstration and Program. In the guard more he checks on any intrudes with its sensors and barks at them. In free roam mode, he autonomously explores the room by also avoiding obstacles. The demo mode shows its tricks and […]

The new robot crab that has just been released seems to have much more capabilities than its cheap price suggests. It is able to respond to its environment by avoiding obstacles, respond to hand clapping or loud banging sound by running away. It is also capable of responding to light by moving toward darker spots. […]

Would you leave your child with a robot?

A leading robotics expert at the University of Sheffield will raise the alarm about a new generation of childcare robots being developed in Japan and tested in American schools, at the Cheltenham Science Festival today (Thursday 5 June 2008). Professor Noel Sharkey will discuss a number of ethical issues linked to the near-future applications of […]

« Previous 1 … 4 5 6
We welcome your quality content in this category and will consider to publish your post, although we can not promise. Please email your content to us here.