Cellrobot is a system made up of individual robotic cells which are put together to form other functional robots. Its kickstarter campaign will start on October 13th.

At the core of the robot, lies a HEART, which communicates with the other frame/muscle cells that are connected with it. Inside each CELL, there is a servo motor, a sensor and an independent MCU (Microprogrammed Control Unit). Once connected to the heart using easy-to-connect snap joints, each cell can be directed to move in any direction and angle desired. These cells will come in sets of 2, 4, 8 and 12, and can be configured in any way. Additionally, there will also be functional cells (called x-cells) for things like: spotlights, wheels, connectors, and cameras.CellRobot will launch with its own supporting mobile application (that works with iOS and Android based phones). The app will have two modes: GUIDE mode and CUSTOM mode. The guide mode directs users on how to assemble different robots and helps to check whether they’ve done it correctly. The custom mode allows users to create any shape or movements they want. Irrespective of mode, the app immediately recognizes what has been created and shows a 3D visualization of it through the app.The app will also include a shape library for an initial set of ideas on what to create. The shape library will expand over time as the community adds new configurations, ideas, and experiments into it. Once a robot is setup, it can then be controlled using the app. The robots can be assembled and disassembled rapidly and with ease.The company will also be offering an open platform to enable other technology providers to develop applications and new types of x-cells on top of the CellRobot solution.The Kickstarter campaign will go live on October 13, 2015 for a duration of one month. Product prototypes and demo units are being tested at the moment, whereas actual manufacturing has also initiated. The heart, cells and x-cells (connector, spotlight and wheel) will be ready to ship to Kickstarter backers in December in time for the holiday season, whereas the camera related functional x-cells will be shipped out next quarter.The costs will vary from $169 to $600 USD for different kits, depending on how many cells are included in the package. 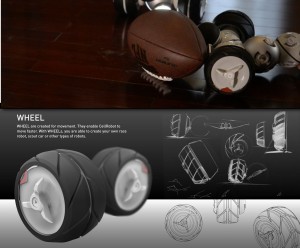 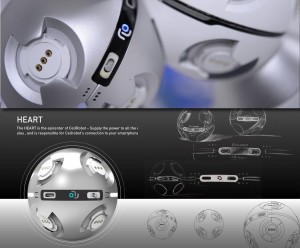 Cellrobot Kickstarter Campaign added by admin on October 7, 2015
View all posts by admin →