By admin on April 2, 2013 Hobby / Kits / Toys  ·  Comments Off on Quadrocopter swarm light show over London

As a harbinger for the Paramount film “Star Trek – Into Darkness”, starting in May in Europe’s cinemas, a swarm of 30 mini-helicopters equipped with the LED lights drew the Star Trek logo into the skies over London. The choreography for the show was developed by Ars Electronica Futurelab from Linz (Austria). Quadrocopter maker Ascending Technologies GmbH from Munich (Germany) provided the aircrafts.

30 LED-equipped mini-helicopters, for its four rotors also called quadrocopters,performed a spectacular show: They drew the Star Trek logo into the nightly sky over the city of London. Film producer Paramount had commissioned the flying light sculpture. The light show was supposed to give a sign to the people waiting for the theatrical release of the new Star Trek  episode “Into Darkness”, which starts in May in European cinemas.

The show was carried out by AscTec Hummingbird quadrocopters produced by German manufacturer Ascending Technologies. The small helicopters, weighing only a little bit more than one pound, are powered electrically. They have an on-board GPS module, with which they can autonomously find and hold their position. Which position transmits a software developed by Ars Electronica Futurelab by radio control. With their small LED bulbs as payload, the quadrocopters can form dynamically any figures in the sky.

After its world premiere at the Linz  “Klangwolke” festival this was the second mission of the quadrocopter swarm. “This  production was a really big challenge, but that’s exactly what makes it so  fascinating,” says Horst Hoertner, director of the Ars Electronica Futurelab. The most important step was the development of a new, three-dimensional choreography in a  short time. “Now, not even a year after our first contact, the show in London impressively demonstrated what we’ve achieved in the meantime,” says Daniel Gurdan, CEO and Head of Development at Ascending Technologies. 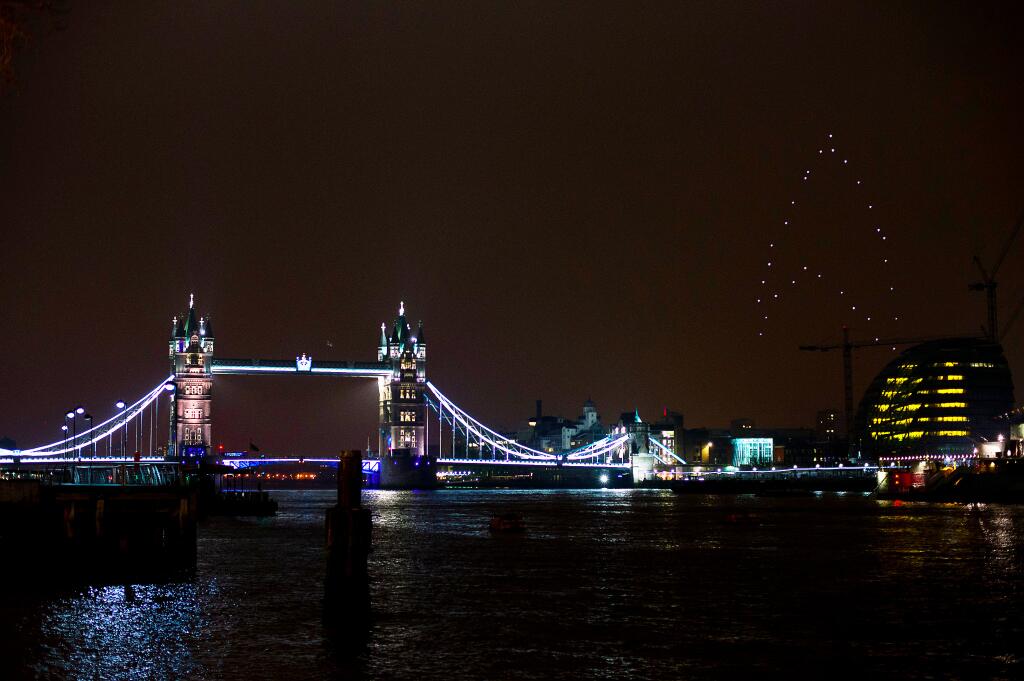 The idea for a sky choreography with quadrocopters arose during the preparation of the “Klangwolke” Festival in 2012. Ascending Technologies was the only manufacturer worldwide, who saw himself in a position to realize the idea of the Ars Electronica Futurelab. Nobody has been able to control such a large number of quadrocopters with the required precision. In a joint research project the partners then improved the hardware and developed the software for such flights. With a total of 50 mini-helicopters simultaneously choreographed they still hold the world record.

Based on the design software 3D Studio Max the Ars Electronica Futurelab developed a control software for the swarm. Like in a 3D animation designers define the three-dimensional shape of the light sculpture and its movements. The respective results are forwarded to the flight control software, which sends the coordinates to the quadrocopters. The system is immune to interference from cellular phone or wireless networks. It takes into account even small deviations in position by GPS measurement errors or wind, so that a secure choreography possible.

The partners now possess a reliable system to create a complete new kind of visualization – even in such sensitive places, associated with high security requirements, like central London. “With this swarm, we have developed a completely new art form, a flying light sculpture”, says Horst Hoertner. “And the mission for Paramount shows that it might be even commercially interesting to develop this art form further.”

Find updates about this press release on:

Quadrocopter swarm light show over London added by admin on April 2, 2013
View all posts by admin →