Here is a life size android robot “Robot Betty9” by robot enthusiast Thomas Messerschmidt. Below is the information he provided to us:
ROBOT NAME: Robot Betty9

Robot Betty9 is an expensive life-size android/ humanoid type of robot. She is an entertainment robot with A.I. and voice I/O.

She has “sung” at various venues in Southern California. Her singing voice is computer generated using a product called “Vocaloid.”

For her speaking voice I use one of the AT&T voices with with Microsoft’s SAPI 5.1 speech for TTS (text to speech).

She was built from a plastic mannequin that I had purchased in NYC.

Her mouth does not open, rather there are several LEDs that flash in sync with her voice. I use a “color organ” board which feeds into an Arduino microcontroller.

Her neck turns left and right and nods forward and backward. Her arms use servo motors for the shoulders and elbows. I have not yet animated her wrists nor fingers. 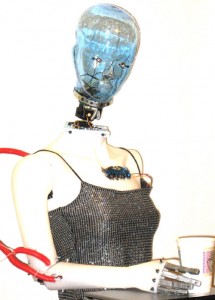 Images Credit: Thomas Messerschmidt
Her legs are not articulated yet, so to move her around, I built her a pair of power rollerskates. The locomotion was created and run with VEX, gears, servo motors, and a VEX microcontroller.

Her other articulated joints are run with standard servos and a BASIC Stamp2 microcontroller.

Her A.I. is run on a PC running windows XP and a very custom version of “Leaf A.I. Robot” software.