this decade, report Teal analysts in their latest market analysis. The emergence

of the commercial UAS market, growth in demand from governments around

the world to better patrol borders, and continued consumer drone growth all

that non-military UAS production will soar from $2.6 billion worldwide in

constant dollars. Over the next decade the market totals $65 billion.

development of a service industry and involvement of major technology

companies all are creating the foundations for solid growth.” Intel Corp.,

Google and Facebook made acquisitions and now are developing UAS

Worldwide commercial is projected to grow from $387 million in

Construction will lead the commercial market. All 10 of the largest worldwide

construction firms are deploying or experimenting with systems and will be

equipment suppliers are all either distributing drones or planning to build

worldwide. The ability to do unmanned spraying of crops and also do imagery

that can detect when and where to apply fertilizer, pesticides and water offers

tremendous potential. While it grows more slowly than construction, the

agricultural UAS market has the potential to continue to grow considerably

beyond the forecast period.

production of solar-powered UAS, and Google and Facebook are also working

on systems. The technology looks likely to be in place within several years to

bring the internet to areas of the world with no service.

Other important segments, ranked in order by ten-year size, include energy,

insurance and general photography such as real estate marketing. There may

deliveries of humanitarian supplies to remote developing areas. Yet regulatory

restrictions and the uncertain economics of delivery make it impossible to

make a forecast for what could potentially be quite a large segment.

Civil government UAS will be a much smaller segment than commercial, but

the appeal is growing. The European Union’s creation of a new border and

use of the unmanned systems. The United Nations is seeking to expand the use

of UAS in peacekeeping. Drones are catching on with public safety agencies

The consumer drone segment will continue to grow although the explosive

increase of the recent past will slow. The continuing increase will be based on

easier to use systems with new capabilities and a broader range of suppliers.

In addition to examining the relative growth rates of the market segments, the

strategies companies are using to address the market.

Consumer drone manufacturers are seeking to move into commercial markets

by moving up the value chain. Defense companies are working to develop

smaller, cheaper systems for civil government and commercial use. Start-ups

Market Profile and Forecast to provide greater analysis. Now the civil and

military markets will be treated in their own volumes, building on the

by customer, region, and class of UAS as well as by market.

manipulation and offering a powerful strategic planning mechanism. It also

offers searchable appendices of US and French UAS operators, including the

systems being used and their manufacturers. 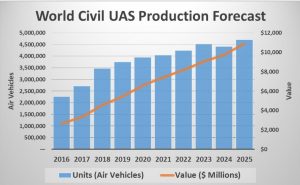