By admin on September 24, 2011 User Posts  ·  Comments Off on Coyote—A Tale of Unexpected Consequences 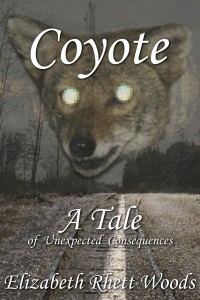 Coyote—A Tale of Unexpected Consequences is the story of an intelligent robot coyote who longs to be free, and her relations with her creators.

Zoë Neville, a published poet, and amateur photographer, is invited to submit a short film, on any subject she chooses, for a New Films/New Filmmakers Festival.

Annoyed by learning of the array of electronic and other surveillance gadgets along the US/Canada border, which can peer deep into Canada, Zoë decides to make a film about a robot coyote smuggling marijuana into the States in a private gesture of protest and defiance, and enlists Peter Whittaker, a research scientist engaged in studying Artificial Intelligence, to help create it.

Peter disapproves of Zoë’s intention to actually use the robot to smuggle a small amount of marijuana into the U.S., although he won’t stand in her way, and continues to perfect the coyote’s intelligence and other capabilities, including speech. The robot, in addition to its plastic and metal components, also has living nerve cells, both human and coyote, female and male, incorporated into its make-up. The robot’s dawning consciousness and point of view is expressed through poetry, and Coyote’s struggles to escape are seen from both the robot and Zoe’s points of view.

The smuggling trip is successful, but during it, Coyote meets a real coyote (although from Coyote’s point of view it’s an Almost-Coyote, being unlike herself) a male, which awakens the robot from thinking of itself as ‘It’, to realizing that ‘It’ is actually ‘She’. When Zoë retrieves Coyote from their rendezvous in the U.S., Coyote, longing to pursue Almost-Coyote (who, after coming close to touch noses, has run away from her), begs Zoë to let her go. Zoë refuses and sends Coyote ‘Nowhere’ (that is, turns her off), but on the trip to the cabin where she’s to rendezvous with Peter, Zoë  stops the car, takes the robot out of its carrying case, and turns it on, thus marking a turning point in relations between Zoë and Coyote.

In Part II Coyote is stolen but manages to escape, and as events play out among Zoe and Peter, the thieves, and a family of wild coyotes, Zoe, Peter and Coyote grapple with the unexpected consequences of their actions.

Coyote—A Tale of Unexpected Consequences added by admin on September 24, 2011
View all posts by admin →