By admin on August 1, 2015 Various  ·  Comments Off on Arpeggio, the robotic piano player

Arpeggio is a Piano Playing robot that will align itself in front of a
piano with precision controlled movement and play the keyboard as
well as the pedals with human touch and emotion. Arpeggio is capable
of playing dynamically, his high resolution interface demonstrates
1020 levels of individual keynote expression as well as 256 positions of both sustain & soft pedal’s.

Traditional methods of installing a player system into a piano require major modifications to be done to the instrument. Many piano owners are not willing to compromise their beloved instruments. Arpeggio is the solution…

Computer controlled, Arpeggio precisely captures the finest nuances
of the original pianist’s keyboard and pedal movements. This Robot is
a virtual clone of the original artist! 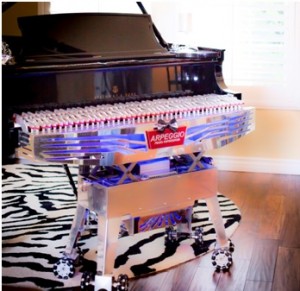 Going as far back to early 1900’s , Artist’s from the past and present, have recorded on other forms of player piano technology. Their performances have been immortalized and are now being reproduced by Arpeggio the piano playing SuperDroid.
Arpeggio represents a major step into the future of Robotic Piano
Performing Systems. Arpeggio is not a Player Piano, it is a Piano Player!

Whats next for Arpeggio, the Piano SuperDroid?

Arpeggio, the robotic piano player added by admin on August 1, 2015
View all posts by admin →