The EU co-funded COMET consortium is creating a revolutionary solution enabling the use of industrial robots for high-end machining. Robots of any brand fitted with the novel COMET plug-and-produce controller unit successfully respond to manufacturing industry needs for cost effective, flexible and reliable manufacturing solutions. Nikon Metrology is a main contractor developing an adaptive tracking system to detect deviations from the programmed robot path. These are used to initiate real-time tool path corrections in order to maintain the targeted accuracy throughout the entire machining sequence. The proposed COMET solution will be on average 30% more cost effective than dedicated machine tools, while delivering absolute positional accuracy better than 50 micron.

To remain competitive, high-end manufacturing companies in Europe are looking for accurate, reliable and maintenance-free machine tools offering fast changeover, programming and setup. Industrial robot technology could provide an excellent base for machining because it is flexible and affordable.

Combined with enabling metrology solutions, industrial robots offer distinct advantages over expensive specialty equipment designed for specific machining tasks. As part of the COMET project, Nikon Metrology is responsible for developing an ADAPTIVE TRACKING SYSTEM. It helps adjust real time robot arm positioning in relation to where it should be according to the initial programmed robot path. 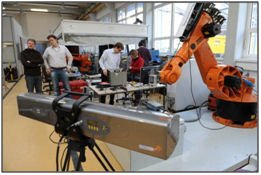 The adaptive tracking system tracks the location of the robot head in real time, and feeds back the metrology data using a closed feedback loop via the controller. This innovative metrology-adjusted process firmly increases robot accuracy because it nearly eliminates the influence of robot warm-up, drift and backlash. It underlines the importance of the adaptive tracking system in transforming industrial robots into precision tools for milling, deburring and other machining applications. There is high demand for such robots in aerospace and automotive markets as well as manufacturers involved with mold & die and high-precision parts. 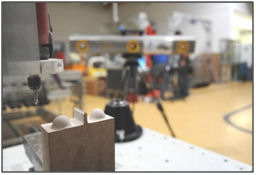 The novel COMET robot control system also allows modules other than the adaptive tracking system module to be plugged in. The other modules focus on kinematic and dynamic models to set up a unique robot fingerprint, a holistic programming and simulation environment, and a high dynamics compensation mechanism to eliminate remaining positional errors. In total 14 partners from industry, research institutes and universities collaborate to make this truly innovative European project a success. The COMET plug-and-produce controller is a modular system that fits most robot brands, including ABB, Fanuc and KUKA. 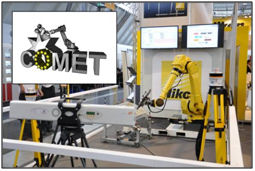 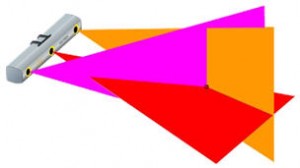 K-series’ pre-calibrated solid state camera system consists of 3 linear built-in charge coupled device (CCD) cameras. With cylindrical lenses on all cameras and the middle camera tilted 90 degrees, the optical CMM measures the locations of infra-red light emitting diodes (LEDs) mounted on the robot head. As a LED is located where the 3 CCD observatory planes intersect at the instance of capture, the system is able to determine the point coordinates based on the plane inclination angles. The K-Series system offers the means to track multiple LEDs simultaneously with 6 degrees of freedom at a sample rate up to 1000 Hertz to allow for dynamic measurements.

The module for the corrective adaptation continuously compares the measured position, speed and acceleration with the corresponding data in the part program. A model-based algorithm will then decide when and how to adjust robot operation to meet the accuracy required by the machining process. Development efforts from Nikon Metrology engineers concentrate on measuring accuracy, system latency and module interfacing in order to obtain precise and prompt robot motion adaptations.

Ready for use with any industrial robot cell

The 30-month COMET project was kicked off in September 2010, and currently progresses as planned. After completing the COMET plug-and-produce robot controller, Nikon Metrology will act as a partner in exploiting the project results. Nikon Metrology’s Metrology Integrated Robotics center of excellence will play a pivotal role for customers and robot cell integration companies.

The work reported in this paper is supported by EC FP7 Research Project COMET “Plug-and-produce components and methods for adaptive control of industrial robots enabling cost effective, high precision manufacturing in factories of the future” (FoF.NMP.2010-1-258769).