By admin on October 24, 2011 Events  ·  Comments Off on Digilent Design Contest

Munich –  A smart shopping cart, a bomb disposal robot, and a GPS-enabled rover were some of the winners of the 2011 Worldwide Digilent Design Contest Finals. Held in conjunction with the FPGAWorld conference inMunichon September 14 and 15, the student engineering contest was a showdown between projects that won top honors in the 2011 regional Digilent design contests.

The Digilent contests started in 2006 and showcase FPGA, microcontroller, and robotics projects developed by student teams using Digilent products. Sixteen teams with twenty-five students competed for glory, honor, and cash prizes in the first worldwide finals. Over one hundred teams competed earlier in the regional contests inChina,India, Europe, and theUSfor cash prizes and a paid trip to the finals.

The teams showed off their projects in presentations that featured a development discussion, project demonstration, and Q&A session. The panel of judges consisted of six industry representatives fromGermany,Italy,Taiwan, and theUS. They evaluated the projects based primarily on conceptual innovation and technical implementation. After the contest, the teams also exhibited their projects to FPGAWorld attendees. 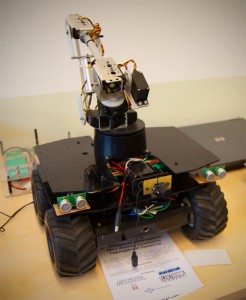 Digilent presidentClint Colesaid, “Because the design contest has gained a lot of recognition, the sophistication of the projects increases dramatically each year. This year’s projects were an impressive variety of academic, industrial, and business applications.  They really showcase our products well and inspire other students who see their designs.  That’s what these contests are all about.”

First prize went to the BitHound, a Xilinx® FPGA-based logic analyzer that inspects and debugs digital circuits. It was developed by Mario Mauerer and Lukas Schrittwieser of the Swiss Federal Institute of Technology (ETH-Zurich).

Second prize went to the Pathfinder Rover, a Microchip® microcontroller-based autonomous rover that uses GPS and a robotic arm to avoid obstacles in its travels. It was developed by Bogdan Chifor and Nicolae Roşia of theMilitaryTechnicalAcademyinBucharest,Romania.

Third prize went to the IsoRouter, a Xilinx® FPGA-based NetFPGA virtualized router that supports parallel virtual networks with a completely isolated network layer. It was developed by Liu Zhongjin of theTsinghuaUniversityinBeijing,China.

Fourth prize went to the Bomb Disposal Robot, a microcontroller-based rough terrain navigation system with a precisely-controlled robotic arm. It was developed by Mihai Băncişor and Ciprian Cărbunaru of the Technical University of Cluj-Napoca inRomania.

The contestants themselves voted to award the Popularity prize to the Smart Shopping Cart, an autonomous shopping cart with tracking and self check-out capability. It was developed by Liansheng Chen, Liming Qu, and Chuan Zhang of the Beijing University of Technology inChina. Venture capitalists have already expressed interest in their idea.

All project details, including documentation and presentations, will be available at http://digilentinc.com/NavTop/Showcase.cfm (as well as those of past design contests.) 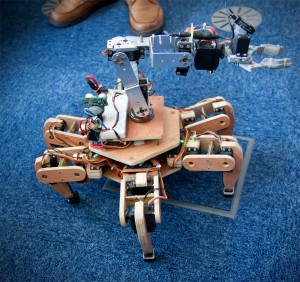 Digilent is an industry leader in providing academic and research solutions in high-end electronics. Over 1,000 universities, training centers, and research laboratories in more than 70 countries use Digilent products and services. Digilent also provides design and manufacturing services for many leading technology companies including Xilinx, Cypress Semiconductor, and National Instruments.

Please visit the Digilent website for product photos, pricing, and ordering information at www.digilentinc.com, or contact Joe Harris at joe@digilentinc.com or 509-334-6306.

Digilent Design Contest added by admin on October 24, 2011
View all posts by admin →