By admin on July 11, 2017 Military / Medical / Vehicles  ·  Comments Off on Robotherapy for children with autism

New Robotherapy for children with autism could reduce patient supervision by therapists.

It is against this backdrop, that researchers from the Vrije Universiteit Brussel are pioneering a new technology to aid behavioural therapy, and one with a very deliberate aspect: they are using robots to boost the basic social learning skills of children with ASD and while doing so, they hope to make the therapists’ job substantially easier.

A study, just published in PALADYN – Journal of Behavioural Robotics examines the use of social robots as tools in clinical situations by addressing the challenge of increasing robot autonomy.

The growing deployment of robot-assisted therapies in recent decades means children with Autism Spectrum Disorder (ASD) can develop and nurture social behaviour and cognitive skills. Learning skills that hold out in real life is the first and foremost goal of all autism therapies, including the Robot-Assisted Therapy (RAT), with effectiveness always considered a key concern. However, this time round the scientists have set off on the additional mission to take the load off the human therapists by letting parts of the intervention be taken over by the supervised yet autonomous robots.

The researchers developed a complete system of robot-enhanced therapy (RET) for children with ASD. The therapy works by teaching behaviours during repeated sessions of interactive games. Since the individuals with ASD tend to be more responsive to feedback coming from an interaction with technology, robots are often used for this therapy. In this approach, the social robot acts as a mediator and typically remains remote-controlled by a human operator. The technique, called Wizard of Oz, requires the robot to be operated by an additional person and the robot is not recording the performance during the therapy. In order to reduce operator workload, authors introduced a system with a supervised autonomous robot – which is able to understand the psychological disposition of the child and use it to select actions appropriate to the current state of the interaction.

Admittedly, robots with supervised autonomy can substantially benefit behavioural therapy for children with ASD – diminishing the therapist workload on the one hand, and achieving more objective measurements of therapy outcomes on the other. Yet, complex as it is, this therapy requires a multidisciplinary approach, as RET provides mixed effectiveness for primary tasks: the turn-taking, joint attention and imitation task comparing to Standard Human Treatment (SHT).

Results are likely to prompt a further development of the robot assisted therapy with increasing robot’s autonomy. With many outstanding conceptual and technical issues yet to tackle –it is definitely the ethical questions that pose one of the major challenges as far as the potential and maximal degree of robot autonomy is concerned.

Research was conducted as a part of DREAM (Development of Robot-Enhanced therapy for children with Autism spectrum disorders) project. 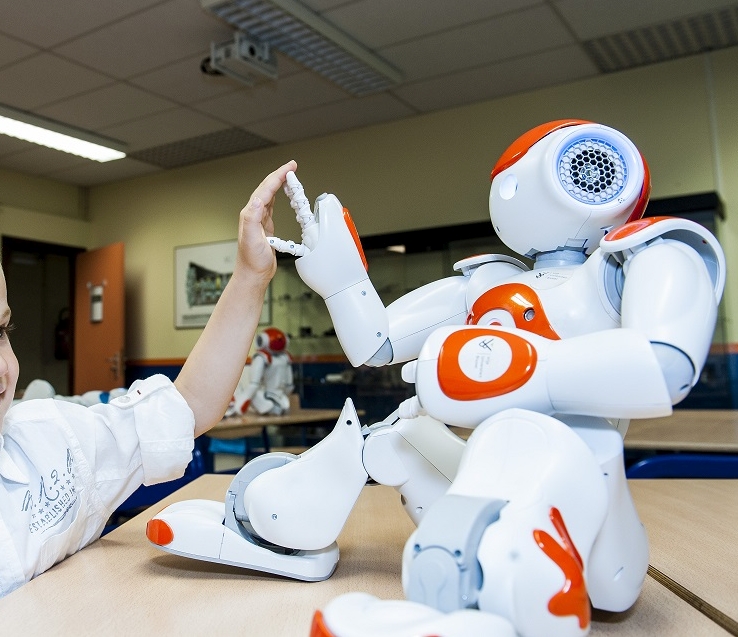 About the Journal:
PALADYN – Journal of Behavioural Robotics is a fully peer-reviewed, electronic-only journal that publishes original, high-quality research on topics broadly related to neuronally and psychologically inspired robots and other behaving autonomous systems.

About De Gruyter Open:
De Gruyter Open is a leading publisher of Open Access academic content. Publishing in all major disciplines, De Gruyter Open is home to more than 500 scholarly journals and over 100 books. The company is part of the De Gruyter Group (www.degruyter.com) and a member of the Association of Learned and Professional Society Publishers (ALPSP). De Gruyter Open’s book and journal programs have been endorsed by the international research community and some of the world’s top scientists, including Nobel laureates. The company’s mission is to make the very best in academic content freely available to scholars and lay readers alike.

Robotherapy for children with autism added by admin on July 11, 2017
View all posts by admin →