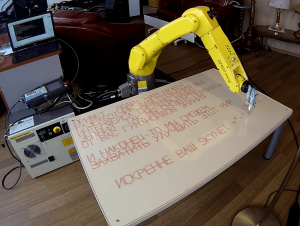 Under the cut, there is the description and a real example of how runtime programming works.

Typically, a program for a robot is a sequence of positions of the robot manipulator. Each of these positions is characterized by the TCP (Tool Center Point) position, the point of the tip of the tool mounted on the manipulator (by default, TCP is in the center of robot’s flange, see the picture below, but its position may be adjusted, and it is often that TCP with the tip of the tool mounted on the manipulator of the robot). Therefore, when programming, TCP position in space is often specified, and the robot determines the positions of manipulator’s joints itself. Further in this article, we will use the term “TCP position”, or, in other words, the point that the robot shall arrive to. 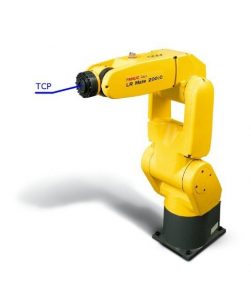 The program for the robot may also contain control logic (branching, loops), simple mathematical operations, and commands for controlling peripheral devices – analog and digital inputs/outputs. In the proposed approach to runtime programming, a standard PC is used as an external controller, which can use powerful software that ensures the necessary level of abstraction (OOP and other paradigms), and tools that ensure speed and ease of developing complex logic (high-level programming languages). The robot itself has only to deal with the logic that is critical to response rate, for execution of which the reliability of an industrial controller is required, for example, prompt and adequate response to an emergency situation. The control of the peripherals connected to the robot is simply “proxied” by the robot on the PC, allowing the PC to activate or deactivate corresponding signals on the robot; it is something similar to controlling “legs” of Arduino. 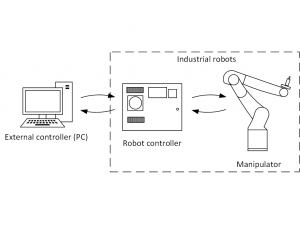 As it has been noted earlier, runtime programming enables sending the program to the robot in portions. Usually, a set of states of output signals and several points, or even only a single point is sent. Thus, the trajectory of the TCP movement performed by the robot may be built dynamically, and some of its parts may belong both to different technological processes, and even to different robots (connected to the same external controller), where a group of robots works.

For example, the robot has moved to one of the working areas, performed the required operations, then – to the next one, then to yet another one, and then back to the first one, etc. In different working areas, the robot performs operations required for different technological processes, where programs are executed in parallel threads on the external controller, which allocates the robot to different processes that do not require constant presence of the robot. This mechanism is similar to the way an OS allocates processor time (execution resource) to various threads, and at the same time, different executors are not linked to threads throughout the whole period of program execution.

A little more theory, and we will proceed to practice.

Description of the existing methods of programming industrial robots.

Without regard to the approach of runtime programming introduced in this article, two ways of programming industrial robots are usually identified. Offline and online programming.

The process of online programming occurs with direct interaction of the programmer and the robot at the location of usage. Using a remote control, or by physical movement, the tool (TCP) mounted on the flange of the robot is moved to the desired point.

The process of offline programming, as the name implies, occurs away from the robot and its controller. The executable program is developed in any programming environment on a PC, after which it is entirely loaded into the robot. However, programming tools for such development are not included into the basic delivery set of the robot, and are additional options to be purchased separately, and expensive on the whole.

As an example, let us consider creating a robot program in runtime mode, which enables the process of writing an ad with a marker.

ATTENTION! The video is not an advertisement, the vacancy is closed. The article was written after the video had become obsolete, to show the proposed approach to programming.

HELLO, PEOPLE! WE NEED A DEVELOPER TO CREATE A WEB INTERFACE OF OUR KNOWLEDGE SYSTEM.

THIS WAY WE WILL BE ABLE TO GET KNOWLEDGE FROM YOU HUMANOIDS.

AND, FINALLY, WE’LL BE ABLE TO CONQUER AND IMPROVE THIS WORLD

To make the robot write this text, it was necessary to send over 1,700 points to the robot.

As an example, the spoiler contained a screenshot of the program drawing a square from the robot’s remote control. It only has 5 points (lines 4-8); each point is in fact a complete expression, and takes one line. The manipulator traverses each of the four points, and returns to the starting point upon completion.

The screenshot of the remote control with the executable program: 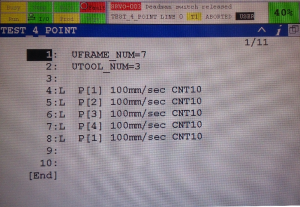 If the program is written this way, it would take at least 1,700 lines of code, a line per point. What if you have to change the text, or the height of the characters, or the distance between them? Edit all the 1,700 point lines? This contradicts the spirit of automation!

So, let’s proceed to the solution…

To implement the program of sending the coordinates to the robot, which will calculate the absolute values of each point, we will use the RCML programming language that supports this robot and, which is important, which is free for anyone to use.

To write a text, we will have to call a series of functions that would draw the letters in the sequence in which they (letters) are present in the text. RCML has a meager set of tools for working with strings, so we will write an external Python script which will generate a program in RCML – essentially, generate only the sequence of function calls that corresponds to the sequence of letters.

The whole code is available in repository: rct_paint_words

Spoiler: “Let us consider the code for drawing a letter, for example, letter A:”

// Setting the marker to the point, the coordinates of the point are 5% along X and 95% along Y within the letter frame

Spoiler: “The functions of moving the marker to the point, with or without lifting, are also very simple:”

// Moving the lifted marker to the point, or setting the point to start drawing

robot->marker_up(); // Lifting the marker from the table

robot->marker_down(); // Lowering the marker to the table

// Moving the marker to the point without lifting, or actually drawing

// Here everything is clear 🙂
robot->marker_move(x,y);

Spoiler: Functions marker_up, marker_down, marker_move contain only the code of sending the changed part of the TCP point coordinates (Z or XY) to the robot.

All configuration constants, including size of letters, their number in the line, etc., were put to a separate file.

In total, we’ve got about 300 lines of high level code that took not more than 1 hour to develop and write.

If the problem had been solved in the “straightforward” manner by online programming with the use of points, it would have taken more than 9 hours (approximately 20-25 seconds per point, given the fact that there are over 1,700 points). In this case, the developer’s sufferings are unimaginable :), especially when he would have found out that he had forgotten about the indents between the frames that the letters were inscribed in, or the height of the letters was wrong, and the text did not fit in.

The use of runtime programming is one of the ways to create executable software. The advantages of this approach include the following:

Thus, with the use of runtime programming, an executable command may be described in a way to make its execution available for any robot within the working group, or may be written for a particular robot, that will be the only one to execute it.

However, this approach has one significant limitation – incorrect understanding of the displacement smoothing instruction (CNT) by the robot, or ignoring it, since when only the current point is sent, the robot knows nothing about the next one, and cannot calculate the smoothed trajectory for bypassing the current point with smoothing.

Spoiler: “What is trajectory smoothing?”

When moving the robot’s tool, two parameters may be adjusted:

Travel speed sets the speed of the tool travel in mm/sec.

Level of smoothing (CNT) allows passing a group of points along the trajectory with the least distance between the extreme points of the group.

The danger of using this instruction in the runtime mode is that the robot reports its arrival to the smoothed target point, although in reality the robot is still moving towards it. The robot does it to request the next point, and to calculate smoothing. Evidently, it is impossible to know exactly in what position the robot is when passing such a point, besides, tool activation at the manipulator may be required at a certain point. The robot will send a signal about reaching the point, but it is not actually so. In this case, the tool will be enabled before it is needed. At the best case, the robot will simply ignore the CNT instruction (depending on the model).

This may be fixed by sending 2 or more points at a time, where the CNT point is not the last one; however, this increases program complexity and the burden on the programmer.