By admin on November 8, 2011 Androids  ·  Comments Off on Improved Asimo

Honda’s famous ASIMO robot, which has just celebrated its 11th birthday recently, was on display last week, with its improved capabilities.  The famous Android can now run 9 km/hour – an improvement from 6 km / hour, it can pour drinks with a bottle and a glass that is arbitrarily placed on a table (including opening the bottle cap) , jump on one foot, individually move fingers which allow better hand dexterity, distinguish voices of three people speaking at once and understand them, walk on bumpy surfaces with bumps up to 0.8 inch. Although Asimo has still not been used in any real world applications that would make real use of the robot, its builders say that the research and development done for ASIMO is being used as a springboard for other products. In addition, it is apparent that with 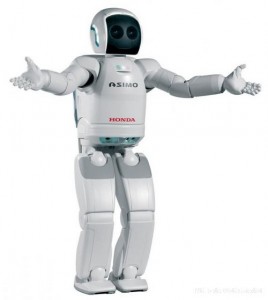 each improvement, the robot is getting closer to being used in the real, unstructured environments. For the original news, see here. You can watch a video here.

Improved Asimo added by admin on November 8, 2011
View all posts by admin →