By admin on December 15, 2011 Androids  ·  Comments Off on Nao next generation robot 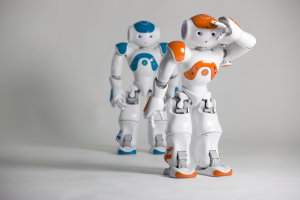 has released its latest version of the NAO robot — NAO Next Gen. The power of NAO Next Gen, the new fully programmable humanoid robot that has the most extensive worldwide use, is opening up new perspectives and fields of application for its users.

(December 9, 2011 – Paris, France) “The inception of this new generation of NAO robots means a lot to our company. We are proud to be in a position to provide our customers with endless options, whatever their sector. With NAO Next Gen coming of age, we shall be able to make it serve organisations that care for autistic children and those losing their autonomy. I created Aldebaran Robotics in 2005 with this aim: to contribute to humankind‟s well-being,” states Bruno Maisonnier, Founder and Chairman of Aldebaran Robotics. See pictures:http://www.aldebaran-robotics.com/en/Pressroom/Photography/nao.html

Three years after it started selling its first NAO models, the company has sold 2,000 robots worldwide. Aldebaran Robotics has now released the latest generation of its programmable humanoid robots, which is intended for research, teaching and, more generally, for exploring the new area of service robotics.

Stemming from six years of research and dialogue with its community of researchers and users, NAO Next Gen is capable of a higher level of interaction, thanks to increased computing power, improved stability and higher accuracy. Therefore, the latest version of the NAO robot widens considerably the range of research, teaching and application possibilities made available to specific user groups.
One of the NAO Next Gen‟s novel and most remarkable features is the fact that it is fitted with a new on-board computer, based on the powerful 1.6GHz Intel® AtomTM processor, which is suitable for multi-tasking calculations. It also has two HD cameras that are attached to a field-programmable gate array (FPGA). This set-up allows the simultaneous reception of two video streams, significantly increasing speed and performance in face-and-object recognition, even under poor-lighting conditions.

As well as its innovative features with respect to hardware, NAO Next Gen boasts a new, faster and more reliable vocal-recognition programme called Nuance. This programme is coupled with a new functionality known as „word spotting‟, which is capable of isolating and recognizing a specific word within a sentence or a conversation.

“On top of this new hardware version, we shall be delivering new software functionalities like smart torque control, a system to prevent limb/body collisions, an improved walking algorithm, and more. We have capitalised upon our experience and customer feedback in order to deliver the most suitable and efficient platform. In terms of applications especially at high-school level, we are focused on educational content, while, when it comes to improvements in personal well-being, we are working on developing specialized applications,” explains Bruno Maisonnier.

“We are also pursuing our goal to provide a NAO intended for individuals through the Developer Program — a community of programmers who are working with us today to invent tomorrow‟s personal robotics,” adds the chairman of Aldebaran Robotics.

Founded in 2005 by Bruno Maisonnier and with offices in France, China, Japan and the United States, ALDEBARAN Robotics designs, produces and commercialises autonomous humanoid robots with the aim of contributing to the well-being of humans. Today over 2,000 NAOs are in use throughout the world as research and educational tools in 45 countries. ALDEBARAN Robotics brings together more than 150 staff, including 60 engineers and PhDs, who are involved in the development and production of the robots.

Nao next generation robot added by admin on December 15, 2011
View all posts by admin →