By admin on January 24, 2012 Domestic / Industrial  ·  Comments Off on Lightweight Robotic Arm 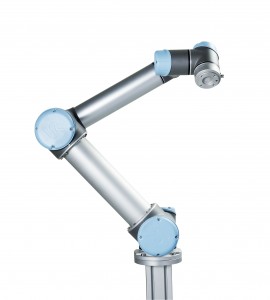 Universal Robots has developed a modern, light weight, and flexible industrial robotic arm, capable of performing many tedious and repetitive production-related tasks. The 6-axis robot, created by the Danish company, weighs a mere 18kg and can handle a payload of up to 5kg.  It has a working radius of 850mm, a repeatability of +/-0.1mm and can be readily programmed to perform the exact movements required, simply by showing the movements to the robot.

Also included with the robot is a compact control box, and the entire system can be easily moved from place to place within the production environment.  The robot, which can be operated by non-technical personnel, is controlled from a touch screen with an advanced, user-friendly graphical interface.

The device was invented by Kristian Kassow, Kasper Støy and Esben Østergaard, who is currently the company’s CTO.

Since its founding in 2005, Universal Robots has grown by more than 300% and has 75 working partners spread across 32 countries in Europe, South America, Africa, Oceania, and Asia.

(See video of some of the applications our robots have performed)

Lightweight Robotic Arm added by admin on January 24, 2012
View all posts by admin →