By admin on May 23, 2011 Events  ·  Comments Off on FIRST Robotics Empowers Emerging Engineers 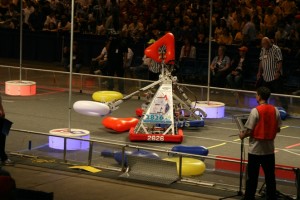 It is said that “the engineer has been, and is, a maker of history;” and with the help of FIRST they will be makers of the future.  FIRST (For Inspiration and Recognition of Science and Technology) is a program that helps young people discover science and technology outside the classroom.

They combine aspects of engineering, math,  design and mechanics to construct robots built for a challenge. Along with the help of mentors and parents from professional fields, this program culminates in a national competition where teams are celebrated and recognized.

FIRST reaches over 248,000 students each season with more than 22,000 teams that create over 20,000 robots. This huge collection of science-minded students and mentors create incredible contraptions that utilize mechanics ranging from garage door openers to PS2 controllers. This ingenuity only affirms the FIRST vision: to transform our culture by creating a world where science and technology are celebrated and where young people dream of becoming science and technology leaders.

The 20th annual FIRST Championship was held at the Edward Jones Dome in St. Louis, Missouri on April 27-30th.  Along with the thrill of the competition, mentors and team members were surprised with performances by  the popular music group The Black Eyed Peas, Willow Smith of “Whip My Hair” fame and other celeb robotics enthusiasts. Morgan Freeman also showed his support for the  FIRST competitors, volunteers and VIP guests by signing autographs and interacting with the students.

The FIRST Robotic Competition (FRC) featured the top 352 high school teams out of 2,200 total teams.  Teams from five countries battled in a 3v3 match, on a “half-court” sized field.  The robots were involved in a game called LogoMotion. Teams were challenged to program the robots to hang plastic inner tubes in the shape of the FIRST logo on pegs of a tall rack. Teams scored points based on the robots ability to place the objects higher and to form the FIRST logo with the tubes. 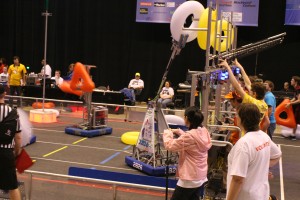 In a new twist, teams were also expected to create and deploy a “mini bot”, which must be capable of climbing a pole in a race against the clock. Oshkosh’s Wave Robotics, (#2826) which was formed only three years ago, placed second out of 88 teams. Each of the team members and mentors received a FIRST Robotics medallion for the amazing accomplishment.

Ann Marie Lau, whose son has been active in the Wave Robotics since January, was excited about the win. She says that “we were in 10th seed position before being selected by the team in 3rd seed position to join their alliance for the elimination rounds”.  Lau said that “being an important part of the winning alliances is a true testament to the mentors, gracious professionalism and hard work of the students!”

Lau feels that the vision of FIRST is evident in the Wave Robotics program: “this not only gives them hands on experience and training, it builds their confidence in the skills they are developing. FIRST not only encourages our kids to build communication skills (along with the math, science and technology), but demands it of them.”

Oshkosh’s FIRST Robotics Team is sponsored by over 25 local business including: Triangle Manufacturing,  Oshkosh Corp.  Muza Metal Products, Oshkosh Community Media Services, EAA, Pacur, American Transmission Company  and CR Meyer. Lau says that “it’s awe inspiring to see how some of the local businesses invest into the future of our community – we can’t do it without them!” These companies support Wave Robotics financially and through donations of parts and resources along with mentoring the students all the way from initial design through competition.

John Warning, a toolmaker at Triangle Manufacturing has been a mentor for three years. He said he was “very impressed with the way the students carried themselves” at the FIRST championship. He says that “no competition is easy, they are each unique and difficult,” so he was very happy with the Wave Robotic’s win.

These young engineers spend weeks designing and constructing  robots and they are also directly involved in fundraising, marketing and web design for their team. Lau sums it up best, saying “if these kids are our future, it will be a very bright and energized one! ”

FIRST Robotics Empowers Emerging Engineers added by admin on May 23, 2011
View all posts by admin →