October 24th, 2011 – Following back to back national BEST Award winning performances, Metro Homeschool Robotics (MHR) kicked off the 2011 BEST Competition season at State Fair Community College in Sedalia, MO on October 21-22nd.  Thirteen teams across Illinois and Missouri competed with the top four going to the Frontier Trails Regional BEST Championship in Fort Smith, AR in December of this year.

BEST, which stands for Boosting Engineering, Science and Technology, is a non-profit organization dedicated to inspiring students to pursue careers in engineering, science and technology.

The BEST Award is an overall award, encompassing not only the team’s performance in the robot competition, but also a Project Engineering Notebook, a Marketing Presentation, Team Exhibit, Team Interviews and Spirit and Sportsmanship exhibited during the competition.

MHR finished first in multiple areas of competition including the BEST Award, Robot, Spirit and Sportsmanship, Project Engineering Notebook, Website, Most Robust (robot durability) and Team Exhibit categories.  Manteno High School (Manteno, IL), another school attending the competition, finished second in the BEST and Robot categories.  MHR, in addition to Manteno, Neosho and Lebanon High School teams will be advancing to the regional competition in Fort Smith from December 8th-10th.

Following the competition, Caitlyn Hetzel of Lee’s Summit said, “I am just so happy about the success we have had and can’t wait for regionals! I think that part of our win was definitely because we are all such good friends and we have fun during the build season as well as at competition.”  Michael Ward of Independence echoed Caitlyn by saying, “I have really enjoyed working with the other team members. They are all hard-working, and when they put their minds to it they can complete any task. Go Team!”

MHR started in 2008 with 12 students.  The team is now comprised of 37 middle and high school students from throughout the Kansas City Metro Area.  They meet in Blue Springs four times a week during the build seasons.  For more information about their team, check out the student created website at www.metrohomeschoolrobotics.org  To find out more about BEST Robotics, visit their website: www.bestinc.org 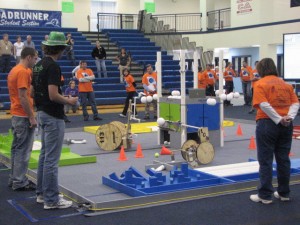