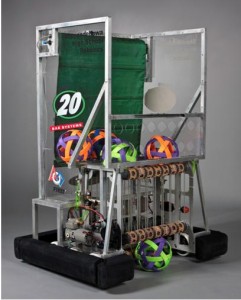 ABOUT COMPETITION: The competition is sponsored by US FIRST. FIRST, “For Inspiration and Recognition of Science and Technology” is an engineering competition founded by inventor extraordinaire Mr. Dean Kaman. When the competition was first started, it was a small, local event in the Northeastern United States with only 28 teams. Since then, it has grown to incorporate over 3,000 teams from the U.S. and around the world.

The 2009 game, Lunacy, incorporated a low-friction environment and a heavy use of teamwork between randomly chosen teams. To level the playing field, the competition called for a unique type of low friction wheel which could not be altered aside from “wear and tear”. To increase the difficulty, these wheels were used in unison with a low friction field made of a slick material called regolith. These two factors were used to simulate the low gravity and friction environment of the moon, hence the name of the game. Part of the engineering challenge was to design methods to improve mobility and maneuverability in the low-friction environment. 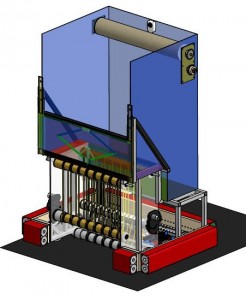 Sweeps and collects about 3 ORBIT Balls per second.

Dumps all the ORBIT Balls in 1.2 seconds

All Motors Have Jaguar Speed Controllers

BUILDER TEAM:: The robot was designed and constructed by The Original Team 20 – The Rocketeers, a founding FIRST Robotics Competition (FRC) team from Clifton Park, New York. The team consists of about 60 Shenendehowa High School students working side-by-side with about 30 volunteer mentors who are engineers from local companies, local business professionals, returning college students, and parents.

Team 20 provides a comfortable environment where students, parents, and mentors all work together toward the same goal. This program helps ensure a brighter future by filling the impending technology career shortage, not only in our country, but around the world. For the students, the robotics program can be a positive life-changing experience. And most of all, Team 20 not only competes, but performs community service projects and supports local school communities.

Recent awards earned by team 20 include: