By admin on January 24, 2012 User Posts  ·  Comments Off on Robot World – A meeting with your alternate double 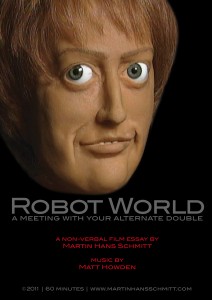 Short synopsis: The non-verbal documentary ROBOT WORLD depicts the evolution of robots from a
mechanical somnambulist to an autonomous sensorium. The neoclassical violinist Matt Howden
emphasizes the film’s message: these artificial people are our alternate doubles.
ROBOT WORLD is a compilation. The source material for this one-hour film comes from robot laboratories
at universities, from private footage at industrial fairs, military archives and corporate videos from the robot
industry. Motion pictures of old 16 mm films from the 1930’s were added. This non-verbal documentary
was recycled from far in excess of one hundred hours of raw material. ROBOT WORLD is the second film in
the “Technology & Mind & Evolution” series of Munich filmmaker Martin Hans Schmitt.

Robot World – A meeting with your alternate double added by admin on January 24, 2012
View all posts by admin →